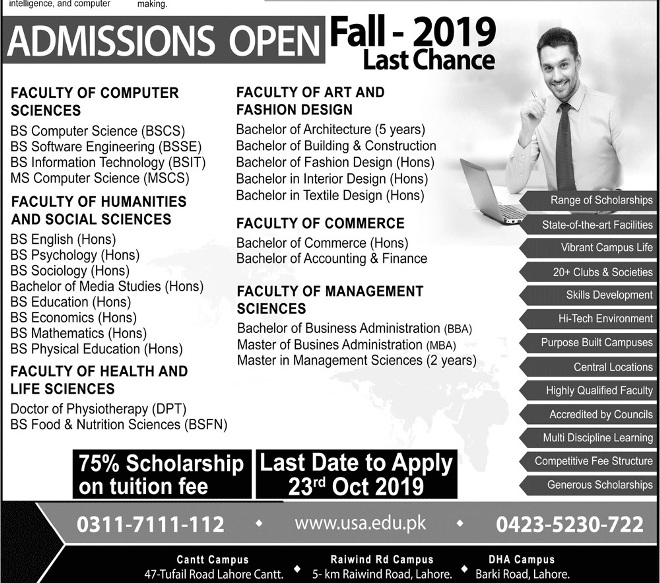 In 1987 when the concept of private sector participation at the Higher Education Level was unheard of, National College of Computer Sciences (NCCS) was established as the first Computer training institution imparting most modern computer education in Pakistan. From 1987 to 1993, NCCS offered Short Courses and Diplomas to the students that would provide them employable skills converting them from ordinary BA degree holder to a computer professional.

In 1993, NCCS started first ever degree program in the field of Computer Sciences in Pakistan, giving it the name of BCS (Bachelor of Computer Sciences). NCCS taught 100,000 students in its 18 years of operations. In 1993, the college was awarded a charter with the status of degree awarding institution with the name of “Institute of South Asia”. This charter was later upgraded and was given the status of Degree awarding university through an act of Parliament in 2005 and was named “University of South Asia.”

University of South Asia is a philosophy, a concept, and an ideology that revolves around the phenomenon of “Change for Better.” USA believes that we should continuously upgrade ourselves to keep pace with ever changing demands of human development. We believe that problems in the society must be identified; solutions planned and innovative programs introduced to implement the solutions without any lapse. It is our conviction that even the ongoing academic programs must be kept under microscopic analysis and the curriculum be made a living entity with a built in phenomena of improvement and perfection. USA is determined to bring advancement in every aspect of human learning