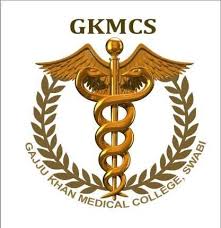 Gajju Khan Medical College is located on the main Swabi-Jehangira road at Bacha Khan Medical Complex, Shah Mansoor, at a distance of 3 kilometers from Swabi Motorway Interchange. This is the current temporary location of the College which will be shifted to the newly constructed and purpose-built building at Ambar Kunda, Swabi.

Gajju Khan Medical College is named after the late great Pakhtun leader Gajju Khan (1490-1565).He participated in the battles of Swat and Malakand in 1515. He remained a great leader of his time and ruled the Pakhtun soil of our province now known as Khyber Pakhtunkhwa for 35 years. He provided many services, the most notable of which was the development of many educational institutes. He died in 1565 and is buried at Shah Mansoor.

The establishment of an institution such as the Gajju Khan Medical College in Swabi was in accordance with the dire need for enhancing the quality of medical education and thereby ensuring the provision of better health services to people of the area. It promises to be a bright prospect, opening doors for the influx of modern medical education for the people and thus ensuring better health standards.

The realization of this dream seemed far­fetched until the Honorable Speaker of The Provincial Assembly KP, Mr. Asad Qaiser, stepped forward and announced that he would do his utmost to attend to this requirement at this hour of need. He kept true to his word and approved this mega-project from the Government of KP. He said these steps were not a favour to the people of Swabi; in fact “it’s the right of the people of Swabi.” He claimed he would strive hard to compensate the region for the 65 years that its people had been deprived of developmental projects. Eventually, it was Mr. Asad Qaiser who laid the foundation stone of the College on 9th February 2014.

medical students through trained faculty, in a conducive environment and through continious evaluation.

Service to Humanity through evidence based medicine.

The main objectives of the College include:

Improvement of healthcare facilities in district Swabi.
To train a new cadre of doctors who will excel in the field of medicine.
To improve the quality of medical education in the area.
There are three teaching hospitals associated with Gajju Khan Medical College; the foremost being Bacha Khan Medical Complex Shah Mansoor. The other hospitals include DHQ Swabi and THQ Lahor (Swabi District). However, once the College is moved to its permanent location, Bacha Khan Medical Complex (Shah Mansoor) will become the main teaching hospital of the College.

The first academic session will imitate with the enrollment of 100 students. The College has enough lecture theatres and other facility to host the basic sciences departments of the College. Equipped laboratories, auditorium museums, examination halls, digital library and canteens are all an appealing aspect of the College. A few noteworthy developments include the establishment of Department of Medical Education and a Self-Learning.