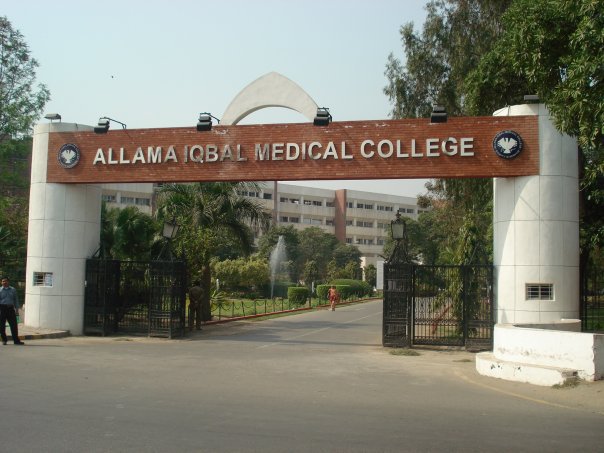 ABOUT US
Allama Iqbal Medical College (Urdu: علامہ اقبال طبی کالج لاہور‎), established in 1975, is a public school of medicine, nursing and allied health sciences located in Lahore, Punjab, Pakistan. Jinnah hospital is attached to the college as a teaching hospital.
The Government’s initiative in the mid seventies to establish new seats of learning to spur medical education and research in Pakistan led to the establishment of this institution on May 2, 1975 as Lahore Medical College.
Prof. Dr. Akhtar Hussain Awan was the first principal. Dr. Muhammad Afzal Sheikh was the first professor of anatomy while Prof. Dr. Mahmood Ali Malik and Prof. Dr. Abdul Ghaffar laid the framework of the physiology department. Dr. Sanaullah was the first administrative officer leading an able team.
On August 12, 1975, a batch of three hundred and thirteen students began their first academic day. Two years later, the college was renamed Allama Iqbal Medical College to commemorate the centenary celebrations of the great philosopher.
It was housed temporarily in a borrowed inadequate building with meager audiovisual teaching aids at the Post-Graduate Medical Institute. The space was so limited that two shifts of teaching and practical classes were held to accommodate all the students.
Meanwhile, in 1980, the final plan for Allama Iqbal Medical College Complex was agreed upon and its foundation stone was laid in March 1980.With a budget of Rupees 670 millions, of which Rupees 370 millions were for the building and Rupees 300 millions were for the equipment, the work on the construction of the campus started. The college complex was inaugurated by the then President Ghulam Ishaq Khan on 18 May 1989. The work on 1100-bedded Jinnah Hospital started in 1988.
Initially the Services Hospital was affiliated with AIMC, but later as the college moved to its present campus in 1990, Jinnah Hospital was built as a dedicated teaching hospital. The hospital started functioning in 1994, when the OPD was opened. Soon the departments of Radiology, Radiotherapy and Pathology started working. The emergency and casualty department was opened to public on March 23, 1995 and the Diabetes Clinic was started on May 28, 1995.

MISSION STATEMENT
Guided by our glorious religious, cultural and historical principles Allama Iqbal Medical College aims to educate a diverse student body to become knowledgeable, ethical, skillful and compassionate physicians, lab technologists, nurses and physiotherapists. Serious and sustained efforts are made to instill in our students values that will ensure their dedication to their patients as well as society. The Principal’s “Vision 2023” project is aimed at training graduates and post graduates who will understand, and will embrace all dimensions of the noble mission of health care provision.

VISION STATEMENT
To become the centre of excellence & torch bearer of health services and medical education in the region.