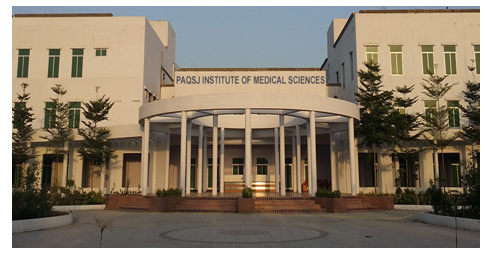 From 1934 to 1980 it was a Dispensary having only OPD facilities. 1980 the Dispensary became Taluka Hospital. By the efforts and devotion of Dr. Rahim Bux Bhatti, Medical Superintendent, in 1997 THQ was declared a MODEL TALUKA HOSPITAL by MSU World Bank.

Due to tireless efforts of the Director and his team over the last several years.

PAQSJIMS was finally upgraded to Self Degree Awarding Institute. The act was passed on12th April 2011. Honorable CM Sindh announced PAQSJIMS as “INDERPENDENT DEGREE AWARDING INSTITUTE”. Finally Higher Education Commission of Pakistan recognized and honored “NO OBJECTION CERTIFICATE” to this institute on 31st March 2015, Notification: No. 15-18/HEC/A&A/2011/606 Date: March 31, 2015. This budding Institute is progressing on its strong medical grounds. It will soon find its name among the high ranking Institutes of the country based on its performance, especially transparent admission process and vigilant examination department. The university is in the process of expansion and very soon new faculties will be added to it.

Mission
Pir Abdul Qadir Shah Jeelani Institute of Medical Sciences provides “state of art” medical facilities free of cost to vast population of central Sindh on both banks of river Indus as well as of lower Punjab & Baluchistan. To raise the standard of medical care with addition of excellent medical professionals and Advance, sophisticated facilities by opening a medical college. PAQSJ Institute of Medical Sciences Medical College aspire to be the centre of excellence in health care sciences and to provide our students with education of highest quality, groom their personality and inculcate in them a sense of responsibility, confidence, commitment and dedication towards their profession, society and country. Our vision is to make this institite a leading centre of excellence which should provide excellent medical teaching and patient care. Sindh and adjoining provinces are in dire need of proper medical care thay deserve to be looked after carefully.