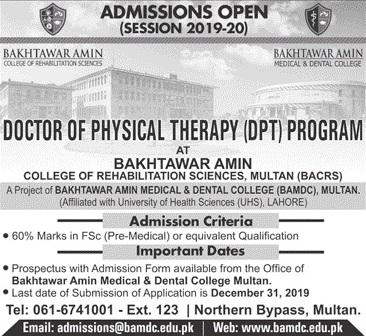 Bakhtawar Amin Memorial Trust, Northern Bypass, Multan was established in April, 1999. It is a non-governmental, non-political and non-profit charitable organization. The Board of Trustees has always been moved by the plight of the poor. It realized that a large segment of population in Pakistan was living below the poverty line and it was in dire need of genuine support from the affluent class of society. The Board decided to serve the lower strata of society through the establishment of the present Trust on permanent basis.Prior to the establishment of the Trust an outdoor dispensary was setup in January, 1998 at Masoom Shah Road, Multan. The response was encouraging. The Trust was formed and registered by the Sub-Registrar Urban Multan under the Trust Act of 1882 vide registration No. 3164/1 dated 08-05-1999. Trust is also duly certified by Pakistan Center for Philanthropy (PCP).