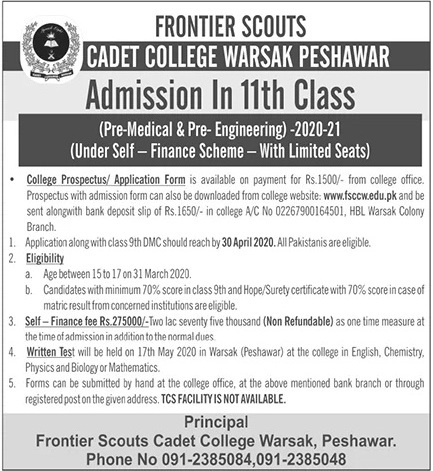 Established in April 2009, Cadet College Warsak was the first boarding institution of its kind in the country run by frontier Corps KP. Its founder Principal was Mr. Jehanzeb Khan (Late), an eminent Civil Sevant. The second Principal was an ex cadet of Cadet College Petaro Col ® Mahmood Ul Hassan Awan (Late). After his sad demise Col ® Abdul Hannan took over as Principal & Project Director. Presently Brig ® Pervez Khalid Babar, an ex Alamgarian and ex faculty of PMA, is doing as Principal and Project Director since February 2017.

Primarily, the College prepares the cadets for the SSC and HSSC examinations. The College distinguishes itself continuously.