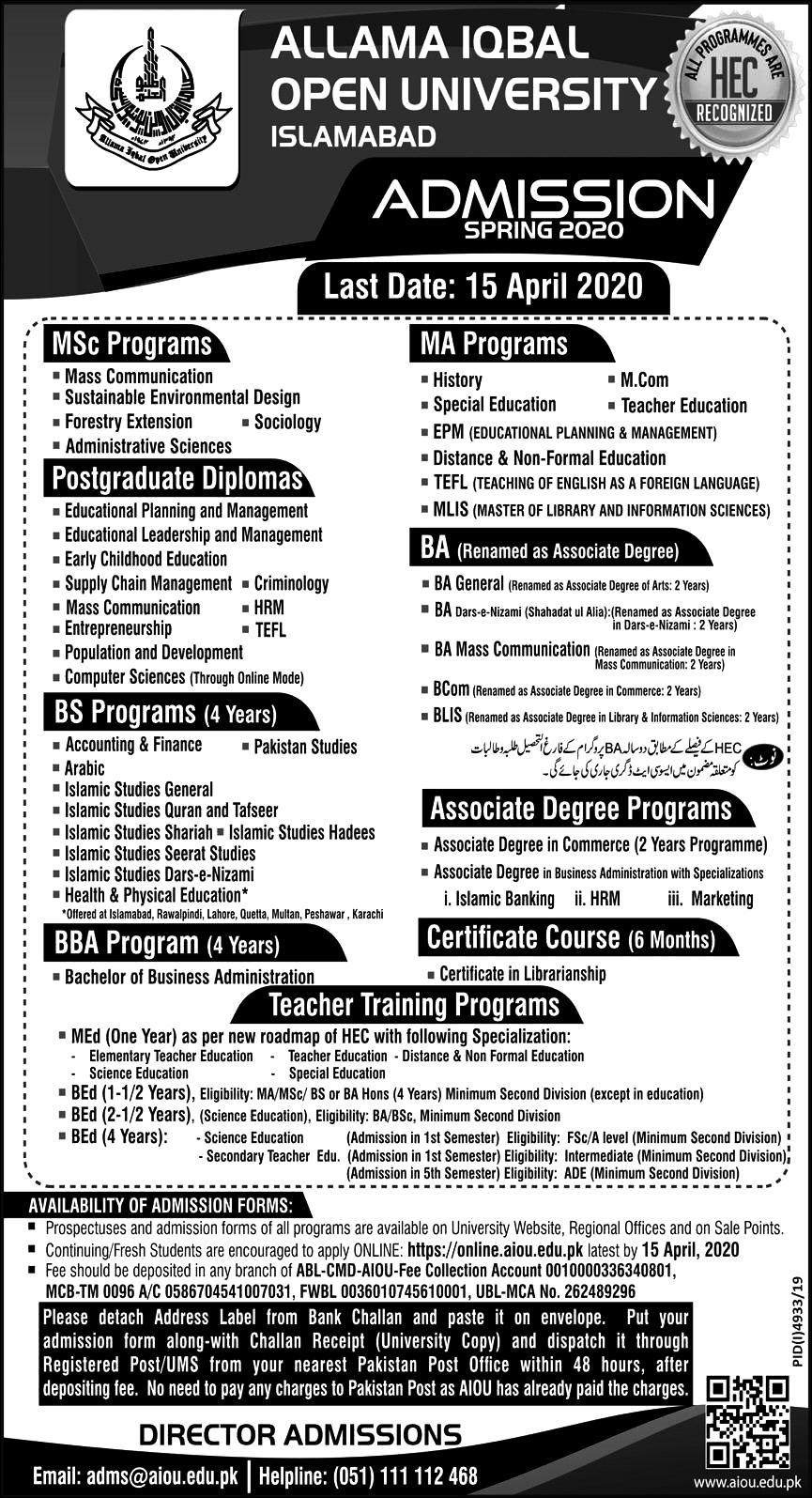 The Allama Iqbal Open University was established in May, 1974, with the main objectives of providing educational opportunities to masses and to those who cannot leave their homes and jobs. During all these past years, the University has more than fulfilled this promise.

It has opened up educational opportunities for the working people and has provided access to the females on their door steps. It has also done pioneering work in the field of Mass Education. It is now breaking new grounds in the fields of professional, scientific, and technical education. It is attempting to reach out to the remotest areas of Pakistan. It is also attempting to harness modern information Technology for spreading education in Pakistan.

The idea of Distance Education was first mooted in UK in late 60s by the British Prime Minister, Mr. Harold Wilson. He was of the view, that educational opportunities must be provided to those who might have missed better education due to early employment and wish to upgrade, their knowledge and skills, in their spare times in the evenings at home. The UK Open University was, thus established in 1969. Since then it has become a major institution of learning in UK and has opened up opportunities for millions of working people. The gospel of distance and Open Learning has, since then spread throughout the world. More than sixty Open Universities are operating around the world on the basis of Distance Education. Modern information Technology has made the task of Distance Education much more easier and effective.

The AIOU, when established in 1974, was the second Open University in the world and first in Asia and Africa. It, thus, speaks of the foresight of the policy-makers of that time. As these past years of AIOU have proved, Distance Education has opened up new opportunities for millions, particularly women, and supplemented the efforts of the federal and provincial governments in a big way and that too without becoming a burden on their resources.

The idea of Distance Education assumed greater relevance and acceptance in Pakistan due to the factors of poverty and relative deprivation of women. The rate of literacy, incidence of dropouts, and excess to higher education is much lower in the poorer classes of Pakistan. The incidence of poverty is much higher in the rural areas, where formal education is much less established. The rate of literacy and education is much lower for females in Pakistan, particularly in the rural areas, due to poverty and conservative traditions. Many conservative parents under the pressure of old age traditions do not allow their daughters to go out to the schools. The AIOU, through its system of Distance Education has, thus, provided educational opportunities to these housebound girls and women. This explains the reasons why the majority of the students enrolled with the University are females.

Latterly, the University is trying to fulfill another current need. Professional and technical education in Pakistan is becoming very costly, especially in recent years, because of government policy to encourage private sector in these fields. The lower middle class and poorer classes are being marginalized and their children have very little chance to get high education in fields like Business Administration, Computer Science, Medicine and Engineering. The AIOU is attempting to meet this challenge and to keep a window open for these classes by keeping the costs at the minimum and by creating a Student Assistance Fund.

Establishment
The Allama Iqbal Open University was established in May 1974 under Act No. XXXIX passed by the Parliament of Pakistan. It was initially named as the People’s Open University, renamed as Allama Iqbal Open University in 1977 at the eve of the first centenary of the national poet and philosopher, Allama Muhammad Iqbal. The idea of an “open university” was presented with the enunciation of broad principles in the Education Policy of 1972-80, in these words:
“Open Universities are being used in several countries to provide education and training to people who cannot leave their homes and jobs for full time studies. An open university will, therefore, be established to provide part-time educational facilities through correspondence courses, tutorials, seminars, workshops, laboratories, television and radio broadcasts and other mass communication media….”

Objectives
The main objectives of the University as enunciated in the Act are as under:

Operating semester system offered twice a year i.e. Spring and Autumn.
The biggest university in the country with average student enrolment of more than 1.2 million per year.
More than 2000 courses being offered.
9 regional campuses, 33 regional centres, 41 approved study centres (for face-to-face programs) and 138 part-time regional coordinating offices.
1172 Study Centres are established throughout Pakistan.
The largest publishing house in Pakistan printing over 1.8 million books annually.
More emphasis on science and technology by introducing programmes in disciplines like Physics, Agriculture Extension, Livestock Management and Nutrition, Forestry Extension, Computer Science. Collaborating with private sector in establishing study centres to provide coaching and practical training in the fields of Computer Science and Management Sciences.
The largest Teacher Education institution in Pakistan with average enrolment of above 400,000 Students
The first university in Pakistan to establish the student Database.
Computerization at main campus and the regions by provision of around 700 PCs.
Provision of networking facilities between the main campus and the region to exchange data/information and redressal of students’ complaints.
Provision of Internet service at the main campus.
Collaboration with Pakistan Atomic Energy Commission (PAEC) for providing lab facilities to AIOU students.
Establishment of Resource Centre for Basic Functional Education (mainly for illiterates), Literacy and Post Literacy materials.
Pioneer institution in Pakistan to offer post-graduate level programmes in Special Education.
The only institution in the country offering post-graduate programmes in Educational Planning and Management.
Introduction of Master’s, M.Phil and Ph.D. programmes to develop professionals and enhance research capabilities in teaching and research institutions.
Well established Institute of Educational Technology (IET) having in-house facilities for production of TV, Radio and non-broadcast programmes.
“AIOU Magazine” is a regular television programme produced in IET studios and telecast fortnightly from PTV-National on the first and the third Mondays of each month. This feature programme includes reports of latest academic and co-curricular activities happening during the month. The university is having its own FM radio and live FM radio transmission are being made available for AIOU students. (Vice Chancellor’s Annual Report 2012 Pg.# 157)
Establishment of Endowment Fund with initial amount Rs.15 million, in 1997, now reached over Rs.4 Billion (Vice Chancellor’s Annual Report 2012 Pg.# 194) used for the development activities like:
Computerization
Staff development.
Purchase of land for regional centres, construction of hostels for students
Construction of buildings of regional centres, academic blocks, multipurpose centre with 43 buidlings (owned/ rented/leased)
Networking of regions with the main campus.
Establishing data base at the main campus.
Purchase of furniture, transport for students.
Establishment of students assistance fund to help deserving students in payment of fees.
Provision of free education in the University for its employees and their sons and daughters

Student Profile
More than 70 percent students employed.
Female enrolment more than 50 percent.
The rural-urban distribution of the students 58% and 42% respectively.
No age limit for enrolment in University programmes.
A student can continue at his own pace from semester to semester.
At present a large number of clientele is in SSC, Intermediate, Bachelor and Teacher Education porgrammes. However for the last few years the university has been emphasizing more on higher education.
AIOU has the facility available for learners to enroll for the course(s) of his choice at a particular level.
Awards
Earned UNESCO NOMA award and Raja Roy Sing award for innovative strategies for imparting literacy to the rural masses